What are MRI Coils? The MRI Coil: A Brief History The receiver coil picks up oscillations in radio frequency, in the form of an induced electromagnetic field. It does not pick up or measure radio waves themselves.

The RF coil is a complex piece of medical science that has been adapted and improved upon since before the first functioning MRI machines were being built and studied in the late 1970s. RF Coils are the “antennae”  of the MRI machine and have developed in different forms depending upon the needs of the specific imaging type.

RF coils have grown as MRI technology has grown, and also independently from it, and the advancements in medical technology is sure to keep the MRI coil changing through the future.

If you work with MRI coils, you can learn more about our MRI Coil program here.

The Beginning of RF Coils 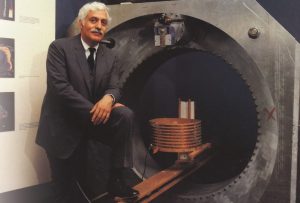 In the 1831s, physicist and chemist Michael Faraday deduced the magnetic power of electromagnetic induction by using coiled metals. From there, scientists developed the practical means by which magnetic induction can be used to create and decipher magnetic resonance images that we use today. When the MRI was originally invented, it housed the RF coils is used internally.

After researchers realized that a smaller coil would be able to produce a small region of interest, RF coils began to adapt in size and shape for individual purposes.

However, the higher SAR results in fewer slices in imaging and higher susceptibility to artifacts. Transmit receive coils are capable of transmitting an RF signal, then changing modes to receive the MF signal. These types of coils allow for greater slice counts and a reduced chance of artifact detection due to tissue outside of the volume of interest. This coil design is more complex than the receive-only coil.

Early coil advancements were made in the SNR gains through improved coil structure. The Signal-to-Noise-Ratio represents signal strength in comparison to variations in intensity due to noise. The signal has to be significantly stronger than the noise and surface coils eliminate the noise from outside the ROI, creating a stronger SNR.

Soon after medical scientists realized this, they began working on coils with ore loop elements, arranged in arrays. Each one of these elements receives a signal and feeds it into a separate receive-channel. In order to reduce SNR, these loop elements need to be weighted differently. This coil configuration is called the phased-array coil and is the standard for modern MRI coils. 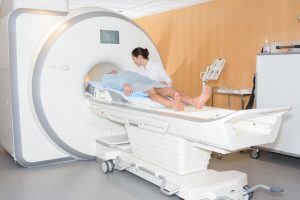 Original array coils, which are the gold standard for MRI coils today, had three areas that could be positioned over different areas of the spine. Increasing the number of array coil channels and mastering the weighing of each channel has allowed for a clearer image of the affected body.

Artifacts from sound interference can be cleared much more easily with multi-channel array coils by comparing the readings from each channel when artifacts occur. Further advancements have also been made in channel increases. A complex computer system can now complete scans in milliseconds, allowing for much faster scans. Array coils are designed so that overlap and interference from nearby elements are prevented.

This creates a much higher SNR. More advancements were made in the shape and flexibility of MRI coils. Early coils were rigid, one size, one shape, elements that were awkward to maneuver and position over different parts of the body, depending on what was being imaged. Medical scientists identified a need for more flexible coils, and coils that would be able to conform to different body parts.

Second generation coils were made from a mix of stiff materials and fabric, which allowed the coil to be bent and braced around body parts. The coil density was also increased. These denser, mixed component coils were more user friendly for medical professionals and technicians because they were lightweight and easier to maneuver.

This meant that the patient could remain still while the coils were adjusted around the body and that higher SNR could be produced because the coils could be positioned closer to the patient’s skin. Continued advancements in these areas led the way for even more lightweight coils, including in the actual metal used in the coils themselves.

Where Technology is Headed

Advancements in science, technology, and engineering have affected and will continue to affect the practicality and efficacy of MRI coils.

Screen printing MRI coils can create more flexible coils that can get closer to the patient’s skin but can also pay for flexibility through reduced clarity and interference from tissue signals. Technology that works to appease both requirements will likely be forthcoming.